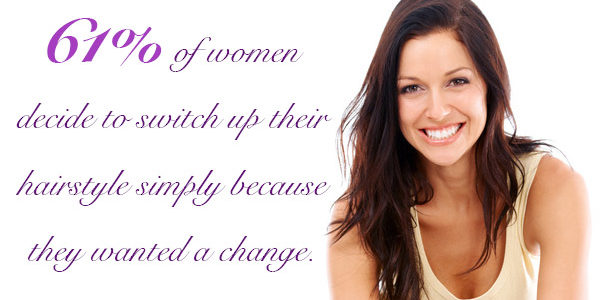 It’s estimated that women have 104 different hairstyles throughout their lifetimes, and 61% of women decide to switch up their hairstyle simply because they wanted a change. What if your next hairstyle could be used to send a text or take a selfie?
A new gadget does just that, taking both Bluetooth technology and hair extensions services to a whole new level by allowing you to control your smartphone by simply stroking your hair weave or extensions.
According to the UK Telegraph, the product, called Hairware, is a set of high-tech hair extensions that can add body to hair and length to short hair styles while also being used to perform a number of actions on one’s smartphone.
The Hairware extensions have been chemically metalized; when the strands are touched, a circuit is completed and a signal is sent to the wearer’s smartphone through a Bluetooth radio inside of a hair clip. The strands respond differently to different motions — for example, you can take a selfie by stroking your sew in hair extensions, or send a text message by twirling them. They also perform different actions depending on whether they’re touched at the top of the strand or at the ends.
There’s no denying the usefulness of such a discreet device.
Katia Vega, founder of Beauty Technology and postdoctoral researcher at the Pontifical Catholic University of Rio de Janeiro, said she developed Hairware as a way to let women discreetly share their location or send a preset message to a friend if they feel they’re in a threatening situation where using an emergency help app could make the situation worse.
Vega said her creation could also be useful to intelligence agencies that need to discreetly capture photos or record conversations, the Telegraph reports. The price for Hairware hasn’t yet been announced, but hair extensions typically range from $300 and up.
And Vega’s next project? A Hairware for men that can be used in beards.
“I still need to figure out the design,” she said. “Our next step is to understand male behavior and how they relate to their beards.”
What are your thoughts on Hairware? Would you use these extensions, or would you rather stick to regular sew in hair extensions? Let us know in the comments below.